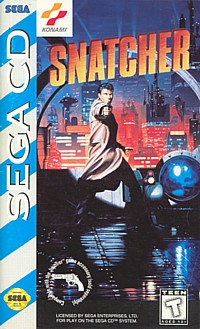 Snatcher is a game for the SEGA CD system that was released in 1994 by Konami Ltd. It is a cult-classic favorite of many gamers for it's intriguing storyline, unforgettable characters, incredible voice acting, and eye catching (for it's time) graphics. It is a one player game that for the most part utilizes the standard Genesis controller, but at certain points in the game, a Genesis Light Gun could also be used in the shooting scenes.

Snatcher had been released on various other platforms before finally landing on the SEGA CD, but the SEGA CD version was the only version (so far) released in the U.S. and dubbed in english. Only a limited number of games were made, so it's quite the rarity nowadays, and it usually brings in a fairly hefty price on eBay for a mint or near mint copy.

Hideo Kojima is the credited creator of the whole Snatcher storyline. Kojima is moreso noted for his work in the Metal Gear and Zone Of Enders series, but he's been known to throw a Snatcher reference or two in some of his other games, including the Snatcher "prequel", Policenauts. And that works vice-versa as well, as one of the Snatcher characters is named Metal Gear.

The game plays out like a digital comic book that you control for the most part. You find the correct paths and actions to perform in order to progress the story and reach the truth behind the Snatcher menace. You play as Gillian Seed, who suffers from amnesia, but somehow believes he has a connection to the Snatchers (a bio-roid lifeform who murders and takes the place of humans). Along with his fellow members of the Junker team, he must discover the truth in order to put a stop to the murders and possibly even find out the truth about himself... and if he can flirt with a few women on the side, all the better!

Snatcher also contained a great soundtrack composed by the Konami Kukeiha Club which is highlighted on numerous (and hard to find) soundtracks. Thanks to the SEGA CD capabilities, quite a bit of this music could be heard in the game in their original orchestrated forms instead of the casual midi style.

Without a doubt, the main highlight of Snatcher is it's incredible voice acting staff. To this day, I have yet to hear a cast that's so in-character and is able to bring the characters to life as in Snatcher. The reason is they were able to hire some great professionals who had been working voice-roles for many years in TV and radio ads alike.

*****
While the chances of another Snatcher (either remake or sequel) ever getting made is unlikely, many still love the game for what it was; a game that is simply a lot of fun to play. Surely, games have come a long way since Snatcher was released, but the fact that so many still consider this a great game, truely shows what a classic this surely is.